30 Ball Bingo is also called speed bingo, and as the name suggests it is a faster version of the usual bingo game, both 75 Ball and 90 Ball.

In Speed Bingo there are 30 balls, and the bingo game is played on a grid which has 3 columns and 3 rows, so there are just 9 squares altogether and no free spaces. 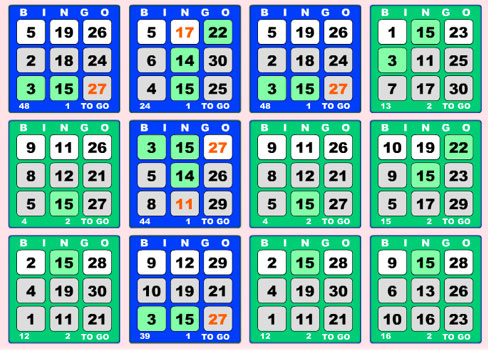 It is very different from the more commonly played versions of the game due to the fact far fewer numbers are called and the grid is so much smaller.

The object of the game is to get your 9 numbers, and call Full House before any one else does.

However there are a couple of operators who have decided to offer a prize for 1TG (one number to go), so in future years it is entirely possible that other varieties of the game may be introduced.

As the game is played in a very short time this means that more games can be played in the time usually taken for a 90 or 75 Ball Game, and therefore there are more winners.

By the same token though as you are playing more games you have to pay for more games.

To balance this out though the increasing popularity of the game has led to higher jackpots, which in turn is attracting more players and further increasing the prize money at stake.

Although a relatively new addition to the online bingo world it is proving popular with players due to its fast pace. People with limited time can easily enjoy a game, and it also appeals to those who prefer to play several short games rather than one longer one.

It can take players a while to adapt to this type of game, so be sure to concentrate when you’re playing 30 Ball Bingo or the speed may take you by surprise.