90-Ball Bingo is the bingo game traditionally played in the United Kingdom, featuring a 3×9 grid pattern with three ways of winning in a single game.

Each of the three row rows contains five numbers ranging from 1 to 90, but unlike its North American cousin, the numbers are in descending order from left-to-right and grouped in groups of ten.

So, for example, column one will only contain numbers 1-9 while column two will only feature numbers 10-19 and so forth. Each card has 15 unique and random numbers.

There are three prizes awarded during each game, starting with a Single Line Across (a line), Two Lines and a Full House, where the player wins the jackpot.

The numbers are randomly called on the Bingo Call Board and the first player to correctly cross off a line, two lines or a full house wins the corresponding prize. However, should more than one player call at the same time, the prize is shared.

In 90-ball bingo, the patterns that can be formed are the “Any One Line” which represents either the first, second or third row and there are three possible ways to win this.

The “Any Two Lines” means that the player has stricken off any 2 rows off the card, these could be first and second, second and third or first and third rows. The final option for the player is the Full House option where all the numbers are struck off.

How to Play 90-ball bingo

If you’ve ever played bingo before, on holiday or at a club, you will more than likely have played 90 Ball Bingo, as this is the version of bingo most commonly played in the UK. 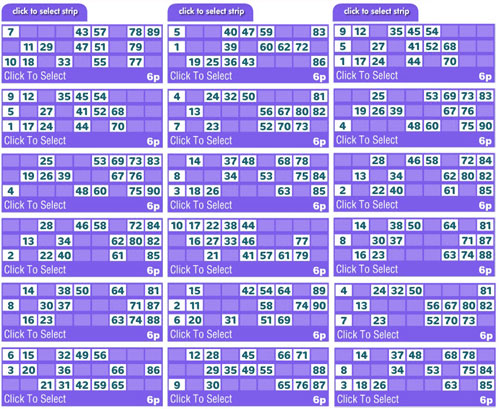 You’ll be pleased as well to hear that 90 ball bingo is played online exactly the same as it is played in a land based club.

When playing 90 Ball Bingo the ultimate goal is to mark off all of your numbers before anyone else does, which is what is known as getting a Full House.

These both will get you a prize, although not as high of course as the full house prize.

Tickets to play in a 90 Ball game can usually sold as a strip of 6 cards. Each card is divided into 9 columns and 3 rows, so there are 27 squares altogether but only 15 of these have numbers on, 5 in each row.

As you’re playing the 90 ball game of bingo it is made easier by the fact that the numbers are organized into columns, so the first one will have numbers 1-9, the second will have 10-19, the third numbers 20-29 and so on.

On each strip of 6 each number will only be found once, which saves some time as once you have found and marked off the number you don’t need to keep searching for it, unlike 75 Ball Bingo where the same number can appear more than once.

If you are playing though just one single card there is a one in six chance that any number called will be on your card.

90-ball Bingo is a fun game to play

The numbers do get called at a steady rate though, so do make sure you pay attention, and if you miss out on a line it may just be as there’s a full house waiting for you when you play 90 ball bingo now!